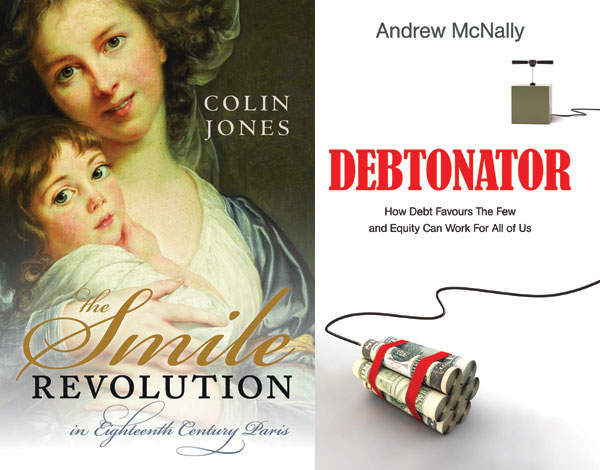 In any given epoch it’s reasonable to conceive that the percentage of people who smile, or who choose not to smile, remains constant. The general reader can be sceptical, therefore, about the idea that the smile could ever be socially ‘invented’; or that, having been invented, its deployment, over a traceable period, might subsequently be ‘revolutionised’.

Yet this more or less is the thesis that Colin Jones puts forward in a fascinating new study about 18th-century France which, in a few brief chapters (the book is only 183 pages long), manages to say more about the social history of the period, and the character of the French, than anything I’ve read on those topics in ages.

First, the thesis: the journey starts in the court of Louis XIV. Hyacinthe Rigaud’s full-length portrait of the Sun King painted in 1701 shows a stern, unsmiling monarch. One can easily believe there wasn’t much laughter at Versailles, at least in public — dignity and hierarchy were the governing virtues of the day.

Normally, what the court decreed in ‘style politics’ percolated downwards, but from the second or third decade of the century Jones discerns a gradual pulling away from the court by the Parisian bourgeoisie — an assertion of independence in morals, in dress code and general demeanour.

The visual clue to this civic rebellion is that the teeth-revealing smile for the first time came into portraiture — as (backed by Rousseau and the new cult of ‘sensibility’) it came into the repertoire of ordinary daily gesture. In Paris, if not in Versailles, it turned out to be OK to be friendly — and to show it. The capital of France had always been in the forefront of politeness, but that omnipresent smile now denoted something beyond mere politesse: an unaffected sincerity, and a sort of democratic equality between the sexes.

This lasted until the Revolution (1789-94), when the smile became suspicious again. ‘Face too jolly to be accounted a true Republican!’ remarked the gaoler at the Sainte-P’lagie prison, before hauling out some hapless aristocrat to be guillotined. Jones, a connoisseur of out-of-the-way detail, tells us that in June 1789 the National Assembly stipulated that there was to be no more laughter in its debates, before going on to nuance this fact with delicious precision: ‘The rule stayed in place — even though the assembly’s records shows its transgression more than 400 times in the next two years of its existence (the first occasion taking place less than 48 hours after the rule was introduced).’

Where laughter did exist, it was sardonic and sarcastic. The soft smile of democratic civility gave way to the harsh grimace of the victors. In the meantime, there was room for acts of heroism on the scaffold. Madame Roland’s final words — ‘Oh liberty! What crimes are committed in thy name!’ — were uttered, witnesses tell us, ‘with a bitter smile on her face’.

The cover of the book shows a pre-revolutionary self-portrait of the painter ’lisabeth Vig’e Le Brun dating from 1787, with her seven-year-old daughter Jeanne clasped in her arms. The artist’s charmingly direct smile reveals milk-white teeth, in excellent condition. Paris during the bulk of the century was the leading centre of dentistry in the world, and part of the reason the smile became popular, Jones argues, was that advances in this field (in cleaning, extraction and manufacture of dentures) enabled the citizen to open his or her countenance to the gaze of others with confidence. (Louis XIV, to return to that monarch for a moment, had lost all his teeth by the age of 40: that was another good reason why it was impossible for him to smile.)

Thus the book under review is, among other things, a secret history of dentistry and, because of Jones’s wit and erudition, one simply can’t imagine the topic being more fascinatingly handled. This is art history on the one hand (the monograph can be read as a sustained gloss on the Vig’e Le Brun self-portrait), history of science on the other, with general social history uniting the two strands. It is a delectable formula, carried off with dazzling ’lan — more like a brilliant long essay than a deep work of scholarship.

Deep it is, however. Oxford University Press, for once, has served its readers splendidly in the design department: font and line-spacing deliver maximum clarity, while the well-chosen illustrations are placed within the text where they ought to be. The inside cover dust jacket carries a colour photo of the book’s mustachioed author (a professor at the University of London). Appropriately enough, a set of shiny white teeth are visible behind the contours of a twinkling and ironical smile towards his readers.

Ed Miliband famously struggled to read Thomas Piketty’s Capital in the Twenty-First Century. Fair enough, since it was a standard-format hardback that ran to 696 pages and he had precious little time on his hands. Policymakers have no such excuse when it comes to investment banker Andrew McNally’s Debtonator, since his book is a concise, pithy essay of a mere 97 pages in a pocket-format hardback.

Piketty and McNally have this much in common: they both regard the rapid increase in inequality as undesirable, if not a social evil. However, McNally believes that ‘the concurrent rise in debt and wealth inequality’ is no coincidence: ‘A relentless increase in the use of debt, especially amongst corporations, I argue, is a crucial link in the creation of wealth inequality; our faith in debt has left ownership of the most productive wealth, shares in companies, in the hands of the few.’ This relationship needs to be inverted: promoting equity ownership among the wider public is a vital tool in reducing inequality.

McNally cites Swissair as a company that fell into the debt trap, borrowing to buy assets and then collapsing when a downturn in the market for air travel made it impossible to service its debt. On the other hand, the Swedish bank Handelsbanken’s shareholders, including its employees, have allowed the bank to follow a build-it-slowly strategy. Similarly, Southwest Airlines appreciates the benefits of equity rather than debt finance because it brings with it long-term thinking, financial stability and both employee and customer satisfaction.

Of course, it is not a universal truth that equity finance equals business success. Corporate executives frequently ride roughshod over shareholders, but might not debt still be the villain here? Public companies have got into the habit of borrowing like crazy and McNally wonders whether it is ‘the debt that has allowed certain equity holders, including senior management, to take more than their fair share or reap rewards before they were due’.

Regulators have encouraged pension funds to invest in bonds rather than equities, thereby exchanging one form of risk for another, namely that of not being exposed to the returns that equities can offer. Companies increasingly prefer bank debt to equities or even bonds.

At the top of the debt creation pyramid are the central banks and their recent policy of quantitative easing, but apart from this ‘there is no greater structural bias in favour of debt finance than corporate taxation’, in particular the tax deductibility of interest expenses on debt finance. He gives the example of US corporations in 2007 paying $294 billion in corporate taxes while claiming $1.37 trillion in gross interest deductions. This tax shield ‘subsidises the returns to equity for the few who have it — and it stops business owners having to use external equity finance that would more broadly distribute the financial rewards of their success’.

Regulators and pension funds have curbed the demand for equity, while corporate tax has curbed the supply. Companies buying back shares may seem to be good for their shareholders, but it means yet more equity being squeezed out of the system.

Our obsession in the West with home ownership, funded by debt, has also crowded out equity, as ‘the rising price of houses leads them to soak up so much of the wealth that people might accrue through their lifetime that there is little room left for ownership
of productive wealth’.

McNally wants governments to nudge us towards a more ‘equity-centric financial system’. His top target is the debt bias in corporate taxation and he recommends that limiting the tax shield by 30 per cent would permit a 10 per cent drop in corporation tax without reducing the tax take.

At the same time, access to equity finance needs to be encouraged, if necessary by tax incentives. Less than 5 per cent of small companies in the UK use external equity finance of any sort. Crowdfunding ‘is at a nascent stage but promising’ and technology may prove to be helpful: if we are now happy to buy investment products over the internet, ‘why not equity stakes in new and innovative businesses?’

The credit industry will lend money for almost anything other than the ownership of equity, even though equities generate the highest return over time. As an alternative to QE, he suggests, central banks ‘could establish zero-cost credit facilities that allow the general population to acquire equity’. Trusts would invest in equity businesses, and the beneficiaries of these trusts would be locked in for fifteen years, after which time the trusts would repay the central bank borrowing. Governments could allocate shares in these trusts equally to all citizens, or to newborns who would only have access to them when they become adults, or to pensioners as supplements to state pensions.

Is all this more fanciful than Gordon Brown’s baby bonds?

The biggest challenge, as McNally recognises, is a cultural one: ‘Convincing broader society that owning a stake in our shared economic future is not in any way elitist is vital to the solution to wealth inequality.’

McNally enjoys grappling with ideas without having to wear the straitjacket of ideology. He wants to create ‘new capital owners’ without ‘directly confiscating wealth from the existing ones’. His book is refreshingly free of graphs and equations. Instead, he uses robust and straightforward prose to make his case. It is hard to resist his conclusion that we should do everything in our power to make equity flow.

Beyond the celebrity guests and Michelin Stars, it’s the details that se…