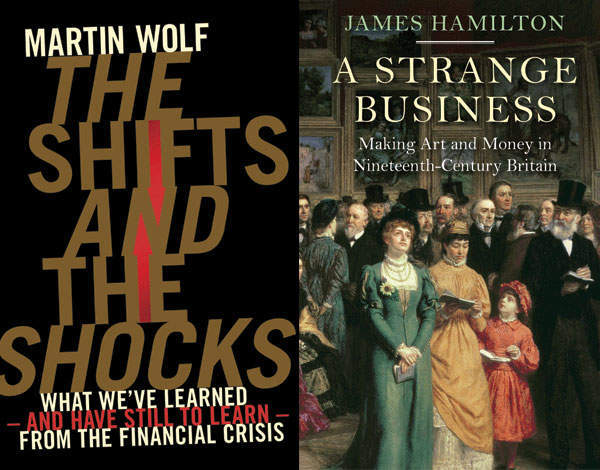 In shaping his world view, the influential Financial Times commentator Martin Wolf has drawn on both the Austrian school of free-market economics and the Keynesian tradition. He also embraced the reforms of Thatcher and Reagan because ‘the UK and the US needed to have more limited and effective states together with more self-reliant and more vigorous civil societies’. However, he now believes that liberal democracy – his own set of core values – is ‘as threatened by financial instability and rising inequality as it was by the high inflation and the squeezed profits of the 1970s’.

The first part of his book (the shocks) looks at how the global financial crisis unfolded between 2007 and 2014 and how it morphed into a sovereign debt crisis, especially in the eurozone (‘Greece was the eurozone’s Lehman’). There is nothing much here that is new about the origins of the crisis, although Wolf is both supportive of the immediate bold policy response (bailouts, governments creating liquidity through quantitative easing etc) and scornful of what came after that (austerity, limited reform of the finance sector).

Part two of the book is the prequel, showing how the shifts in the global economy had led to the underlying fragility of the financial system. Globalisation, despite its many merits, meant that developing countries generated vast current account surpluses which formed a global savings glut. This fed into developed economies which loosened monetary policy, leading to an asset-price boom and a credit bubble.

The third part (solutions) is concerned with ways of avoiding an even more gargantuan financial crisis in the future. This is by far the most stimulating part of the book.

In an ideal world, Wolf would like to adopt something similar to the Chicago Plan of the 1930s. This called for 100 per cent reserve banking, with all money backed by the government or central bank. Instability engendered by banks would thus more or less disappear. In the absence of such radical reform, the best Wolf hopes for is a new business model for banking consisting of far higher capital requirements and more bail-inable debt, though he is anxious that what he calls the ‘new orthodoxy’ among policymakers is reluctant to go even this far.

Wolf describes the eurozone as almost ‘structurally liquidationist’, liquidationism being the brutal school of thought applied in the 1930s of tolerating mass bankruptcy and mass unemployment until the economy eventually recovers. The German-imposed austerity is ‘like chemotherapy, a cure that comes close to killing the patient’. Writing this review in the wake of the Greek election result, it is hard to dispute Wolf’s point that democracy is undermined when external creditor governments and bureaucracies are not accountable to the electorate.

Wolf favours the eurozone changing from a ‘discipline union’ to an ‘adjustment union’, with inflation rising in surplus countries to offset falling inflation in deficit countries. The ECB has belatedly adopted an attenuated form of QE, but Wolf wants more: more insurance of banks and sovereigns and more cross-border equity flows (and discouragement of banking flows). He is even prepared to countenance some of the creditor countries (rather than debtor countries) leaving the eurozone.

Since most of the schemes that have been advanced for eliminating global imbalances – he cites Professor Justin Lin’s proposed global currency p-gold – would require full-blown global government, Wolf prefers that countries should instead retreat from global financial integration.

When it comes to redressing the problem of rising inequality, he has few practical observations other than to say that Thomas Piketty’s proposal for a global wealth tax is ‘unquestionably too ambitious’, although he does favour a land tax.

As a writer, Wolf is less effective in this book than in his much admired columns. Pithy in places, he is weighed down by great pile-ups of jargon in others. Some of the complex economic ideas should have been more lucidly explained for the general reader. What does he mean by ‘full government-creation of transactions money’, for example?

However, this is a mature and thoughtful book. It was not wicked bankers that led to the crisis. Instead, they were in the grip of an intellectual delusion, assuming that risk had been spirited into oblivion by misguided modelling and ingenious financial instruments. At the same time, the regulators were asleep at the wheel, allowing the median leverage ratio (that of assets to loss-bearing equity) of UK banks to more than double from 20:1 to 50:1. What most disturbs him is ‘if the methods used to rescue the economy then make the parts of the elite most associated with the crisis richer than before’. It should disturb us all.

Art, as currently understood, is an absolute value but also, inevitably, an investment and a market place. The messy business side – ‘making’ and ‘selling’ – is supposed to co-exist, somehow, with sublime, otherworldly intimations of beauty. Can we talk about these dual aspects of the activity in the same breath, so to speak? Or do attempts to do ?so always end up in a muddle?

James Hamilton, an experienced art historian and biographer (he has written extensively on Turner), has had the notion to stand back and look at the matter historically. Art, in 19th-century Britain, was just as important a component of society as it is today, if not more so (there being no movies, television or radio to compete with).

Already, from 1800 onwards, we see the essential ingredients of the equation: talented painters and sculptors; a genuine thirst for spectacle among the public; incipient institutions (galleries, museums, auction houses) in which to display and to market the wares; finally, a vigorous capitalist economy – among which, individual rich capitalists called collectors – keeping the whole show in perpetual motion.

Still, it is a large topic to be covered in a single book. Each of its components is potentially a subject in itself. Hamilton hasn’t let himself be daunted. ‘The nineteenth is a rich and extraordinary century: a gleaming, oil-streaked, sun-drenched pool,’ he maintains. ‘The only way that seemed appropriate for me to approach [the project] was with a running jump and something of a splash.’

Certainly his prose is ‘splashy’. It is more unbuttoned and informal, by several notches, than one usually comes across in studies of this kind. Never mind: it is definitely lively. A bigger problem is the huge cast of characters from many walks of life who are corralled together here for our inspection. A helpfully meant appendix lists ?no fewer than 186 separate individuals ‘whose lives intersect within the pages of this book’, but with such a broad canvas the risk is that no single person ever becomes properly individualised.

The publisher might have aided us here, I feel, by making the illustrations more lucid: perhaps placing portraits of the dramatis personae at appropriate points within the text itself, rather than bunching all the pictures together in the middle of the book: a matter, then, of more thoughtful formatting.

Yet I wonder whether this would really have helped much. The truth is that Hamilton seems to show no particular aptitude, or no particular interest (it amounts to the same thing), in telling us who the important characters are. This is surely a pretty important failing. There is page after page of obscure names and obscurer anecdotes: many stories here, but little true storytelling.

What, if anything, can be salvaged from the enterprise? I am probably being harsh about a book that shows, besides good intentions and indeed good humour, a scholar’s diligence: Hamilton has read deeply and widely, and he has a real curiosity about how things meshed together on the practical level.

Did you know, for example, that the hyper-realistically bright palette of the Pre-Raphaelites – Hamilton singles out Millais’ Isabella as a prime example – was due to a completely new range of tints that was put on the market by a chemist called Field? No, I thought not. (This is from an informative chapter on colour paint.) There is another fascinating section on the importance of prints, and the very large sums that could be made both by the artist himself (in licensing fees) and by the skilled engravers involved in this vital secondary market.

Indeed, as one would hope from a book of this title, a lively interest is paid to financial reward in general. We hear of bankruptcies and suicides – Benjamin Robert Haydon’s in 1846 notoriously – yet many in the profession became significantly wealthy. Turner, for instance, always knew how to hold out for a good price; in 1803, at a young age, we find him demanding 300 guineas for a painting – the equivalent, Hamilton tells us, of over ’20,000 now. We need to put this beside the very much larger sums made by contemporary sculptors of reputation such as Nollekens, Flaxman or Chantrey. There were rich pickings indeed for this profession in an age that valued monuments and likenesses. During 1820 and 1821, Chantrey had 58 different commissions on the go, earning an average of ’700,000 per annum in today’s money.

Somewhere in the course of the book we encounter most ?of the major Victorian artists. Besides Turner, there are extended glimpses of the working practices of Constable, Cotman, Etty, Wilkie, Lawrence, Landseer, Frith and the Pre-Raphaelites. That ought to be enough to be getting on with; and yet, as with so much about this book, there is a curious lack of focus and narrative drive. No mention at all is made of the Arts and Crafts movement, nor of the important architects of the age, nor of the battle between Neo-Gothic and Classicism, nor of the influence on the taste of the epoch made by writers like Ruskin and Morris.

The same goes for Hamilton’s handling of institutions. We hear quite a lot in passing about the peregrinations of the Royal Academy and the National Gallery. Yet how these institutions developed over the course of the century, and what their relations were in terms of buying policy to other important new foundations, such as the Victoria and Albert, the National Portrait Gallery or indeed the Tate Gallery – these vital questions are left shrouded in mystery.

After a series of scandals and poor decisions, one of the great names of…