With a career spent in the SAS, MI6 and the FCO, before founding business intelligence firm Hakluyt, Christopher James sure knows how to nose out secrets, says Christopher Silvester 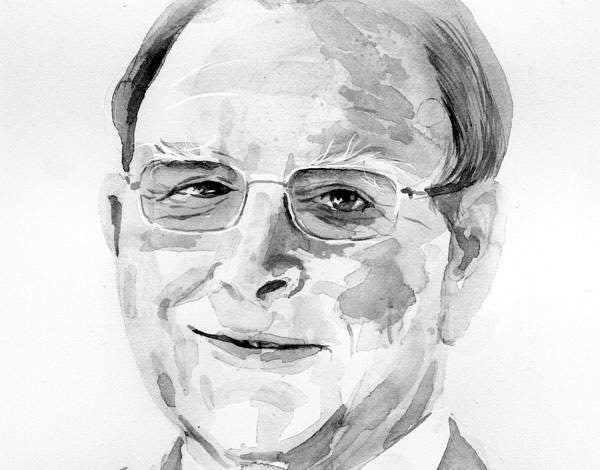 When Christopher James launched his business intelligence firm in 1994 — before anyone knew what business intelligence was — he named it after an international man of mystery. Richard Hakluyt was an Elizabethan priest, diplomat, spy and travel writer who, while posted to Paris as secretary to the English ambassador, had kept Walsingham informed about French and Spanish activities there. That’s not a career so different from James’s own, which has taken in the SAS, MI6 and the FCO, the core of Britain’s secretive global influence.

James was born in India, where his father served in the Indian army. The family stayed on for a few years post-independence but then came to England, where his father transferred to the British army. ‘For the first decade of my life we lived in various places in England, so I was pretty rootless,’ he says. ‘Eventually my father settled on the Isle of Wight. I went to school on the mainland but spent my summer holidays sailing at Cowes.’

Having won an army scholarship, James went off to Sandhurst in 1963. ‘In those days Sandhurst was two years, which was too long for me. I’m not very good at working in big organisations for very long — I have a low attention threshold and a low tolerance for authority figures, even a slight rebellious streak. I quite enjoy being part of a system, but then I think there must be something else to be done.’ Although he got in near the top of the class, he passed out three from the bottom, but still remembers his time there fondly.

He then joined the Welsh Guards and went off to Aden in 1966-67, when Britain was pulling back from everything east of Suez. That was where he first came across the Special Air Services regiment, which was operating alongside his conventional unit. ‘There was an air of mystery about it. In those days it wasn’t as well known as it later became. Nobody quite knew how you got in or what they did, but you knew they went and did things, which was interesting.’

Upon his return to England, he found being in charge of the guard outside Buckingham Palace or Windsor Castle ‘very glamorous for about three and a half minutes. Also, it was quite telling on one’s bank account, and I didn’t have any money. I didn’t have the sartorial elegance to be a London-based officer. My sergeant major made it very clear to me I wasn’t going to be a pin-up: “Why don’t you do some proper soldiering, Mr James, sir?” So I applied to join the SAS. As an officer you had to have four years of soldiering under your belt, which I did, and — I think to a number of people’s surprise — I got in.’

James joined the regiment in May 1971 and found the experience ‘pretty life-changing’. However, he is quick to dismiss the notion that its members are supermen. ‘They’re well-motivated people who don’t accept ordinary, conventional stuff, and have a degree of determination. I found it stimulating and exciting, though with periods of intense boredom, working in small groups, sometimes almost by oneself, and constantly questioning oneself. But we were ordinary people doing unusual things.’

He spent four years in the SAS, mostly operating abroad except for the last part when he and his wife bought a small cottage near the regimental HQ in Hereford. In southern Oman, as part of a low-intensity war that was kept out of the press until after the event, he fought major battles against Communist guerrillas who were coming up through Aden to threaten the Gulf. The regiment was then making the transition to the role it performs today, namely rapid-reaction deployment and anti-terrorist operations.

Rather than return to the Welsh Guards, he gravitated towards overseas intelligence. Perhaps surprisingly, only a few soldiers who left the SAS joined MI6. Over fifteen of the ensuing twenty years he served in Africa, India, the Middle East and Europe, and again he had an enjoyable time.

‘I wasn’t a Whitehall warrior. What I liked was working in what was apparently a large organisation, the FO, but then doing your own thing. It is always a privilege to work with well-motivated people. I’m constantly trying to find what makes people tick, especially when they’re given an unusual task and have to find ways to do it. I’ve discovered that most things are possible if you set your mind to it.’

In his mid-forties in the early Nineties, and having had ‘a reasonable career and a lot of fun’, James decided he wanted to do something else. ‘Her Majesty is a wonderful person to work for, but she’s not the most generous of payers,’ he points out. ‘I’d done my duty and I thought I’d like to go and work in business.’

In the course of his work for ‘Six’, as he calls it, he had met various individuals who held senior positions in British companies. Shrewdly, in the wake of the end of the Cold War, he surmised that what he had been doing for the UK government might have a commercial application.

He launched Hakluyt on a wing and a prayer. A lady called Sue Stafford ran the administration and a friend from the Welsh Guards, Christopher Wilkins, chipped in with some money to rent an office, which they did for ’100 a month, payable six months in arrears. It was an attic above a firm of solicitors, and all it contained to start with was a single filing cabinet.

Its launch came at a propitious moment, soon after Parliament avowed the existence of MI6 for the first time in 1994. ‘The term “political risk” was not in use back then,’ he recalls. ‘Hakluyt was all about personal contact. Nobody could resist meeting a spook, to put it candidly. It took me just over a year to get it under way. Of the 23 companies I spoke to over the space of that year, nineteen said they liked the idea and might use us if the opportunity arose, three said to keep in touch, and one said not likely. Of those 23, they all used us in the first four years. It was of the moment. Nobody was providing overseas intelligence for business except us.’

James remained in charge of Hakluyt from 1995 to 2006, by which time it employed 25 people. After weathering the storms of building it and having found his successor, James bowed out. He had always said he would leave at 60 and so he did, but no sooner had he left than he was looking around for another challenge. ‘There’s always something round the corner,’ he says, and that thing is Longbow NXG, a ‘next generation’ training business that is unique in the same way that Hakluyt was once unique.

His Hakluyt co-founder Sue Stafford, by then working at Buckingham Palace, introduced him to a woman called Kedge Martin, who was herself seeking a new direction. James told her about his idea for a fourth stage of education focused on the children of UHNWs, and she came up with the business plan for Longbow NXG and recruited the coaches.

A Longbow programme is open to anyone above the age of 25 and consists of a personal assessment, a coach who serves as your running mate over six months, a UK residential retreat and an optional overseas residential retreat as well. The idea of the assessment is to learn more about yourself; the running mate is there to help you unlock your own ideas rather than simply to offer advice; the UK residential retreat is about group learning and development; and the overseas expedition is not just a superficial charity project but something gritty that involves integrity, trust, learning and ‘stretch’. Beyond the programme itself, Longbow also offers access to numerous networks.

James has been using his sharp instincts for charitable good, too. In 1997 he and his wife returned to live in Hereford, where the Lord Lieutenant of the county urged him to take on the chairmanship of the Perpetual Trust, which funds the administration and preservation of Hereford Cathedral.

’Hereford Cathedral has a good story to sell,’ he says. ‘It produces wonderful music through its own choir, hosts the Three Choirs Festival and owns some wonderful treasures, including the Mappa Mundi and one of the few copies of Magna Carta. I thought, “Let’s capitalise on that.”‘ Through a friend in Texas, James arranged for the Hereford copy of the Magna Carta to visit Houston, earning a small fortune for the trust. This international voyage of an avatar of British values describes Richard Hakluyt’s life quite neatly — and Christopher James’s too.

Spear’s celebrates its 15th anniversary with a special edition of …

Interviews and panel discussions from the 2021 Spear’s Wealth Insi…